This work is licensed under a Creative Commons Attribution-NonCommercial-ShareAlike 3.0 Unported License

Download the second part of the program from here.

When you are learning something new and (probably) unlike much of anything you have done before, it’s key to repeat – in order to really make sure you understand. Hopefully, after the last part, you’ll find this really easy. We’ll ask you to do a few things to reinforce the key concepts, then you can play around all you want after that! 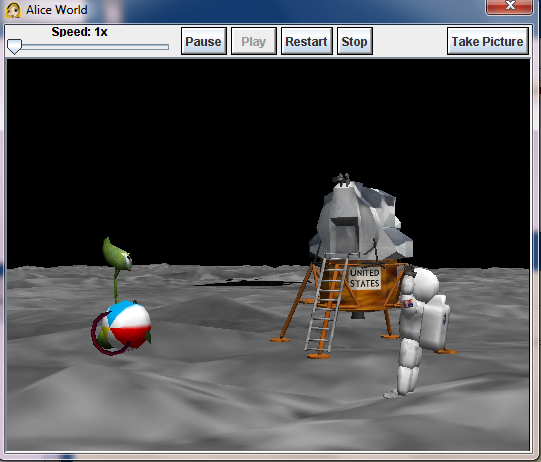 WE MOST STRONGLY RECOMMEND: After you do “one step” play the world to see if it’s going OK so far. That will make it MUCH easier to fix any mistakes.

After you’ve got that done, make sure you can predict what a change in your code would make change in your animation, and test yourself by playing the world.

Make the following changes to your animation:

Get checked for Part 2: 5 pts for correct code and explanation

Submit your Lab1B-1C Questions and Answers Google Doc on the next page.

Can't change a rubric once you've started using it.
Find a Rubric